I've been having a splendid time working on the rare six volume "Da Vinci - Codice Atlantico" [Hopeli, Milan. 1894-1904]. I was asked by a New York area university to completely rebind these lovely volumes in some "spectacular" way. And what I am creating for these volumes will be just that. They will be a set of books that will awe the beholder, hopefully for some centuries ahead. For in my semi-retirement, I found what could be described as some of the most enjoyable days of my career, which this year [2013], numbers 34 years. Taking on the 'extra-special' and 'ancient' commission, and not being concerned as to economics allows me to employ the utterly finest leathers, gold and materials the world has to offer, and combine them into bindings that hopefully amaze.

These massive sized "Atlantico" volumes are simply a delight to behold.  They measure about 16 inches wide, 20 inches tall, and about 2 inches thick. I'm very accustomed to preserving books of this size, so its like second-nature in handling them about the studio. In fact, over-sized ancient folios have been a forte` of mine for over a quarter-century.

Notice the photo directly below. This displays the original sewing structure of of all six volumes of the "Atlantico." It is an "over-sewn" structure, wherein a small number of leaves are sewn around themselves and each gathering is then sewn the same way, and link-sewn to each other. This was procedure was very commonly employed on very large, heavy books, mostly in Victorian days, but not only. Its not necessarily always a bad structure ~ and as long as the leaves are huge and drape downward well, there can actually be very little resistance on the structure itself as the books are opened and used.

I've nearly cleaned all of the spines, but one more go will complete this step. Though a few dark lines are seen here and there along the length of the spines, these are merely where the paper is naturally proud from the sewing and old glue still rests there. I'm grateful that not in a single place is the heavy thread broken, and I have noted that the original thread is of great quality, and, just as importantly, of the correct weight for expecting it to hold these heavy books together.

This six volume set weighs just about 140 pounds, + or -, and this is without any bindings! This is due to the paper, of course. They were printed on the finest P.M. Fabriano Italian paper, of an average weight of 10 point. {Very} heavy paper indeed, and of pure linen, which is, of course, heavier than cotton. 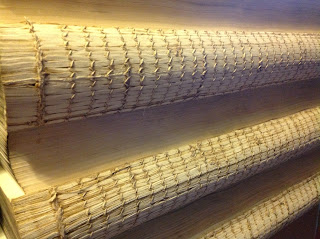 Below, here, is a photo I took via raking light of a few of the text pages. I thought you might enjoy! 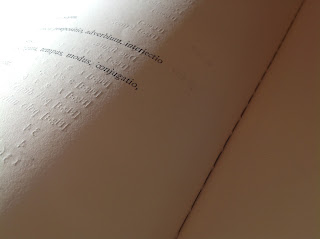 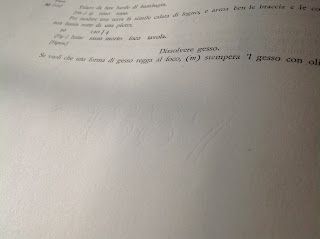 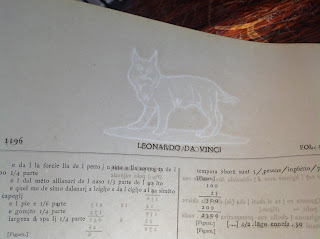 I'll keep updating my blog here as to the progress of the "Atlantico" ~ as well as some other quite phenomenal bindings I'm completing.

Some of My Favorite Pages