I was "playing" with some of my bookbinding toys last night, and thought to take a picture of actually what is a small portion of my bone & wooden folder & and paste brush collection! Everything is quite old, nothing new. The paste brushes where almost never used, and three of them I believe were never used. 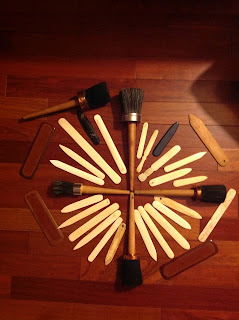 The Bookeye4/V1A is the latest cutting-edge technology in book and document scanners! Made in Germany, this new model (with all it's phenomenal bell & whistles) was just released this Spring 2013.

How does this machine relate to my "Journey" as a bookbinder?... Part of my journey has always been in recreating rare books ~ the TEXT + BINDING STYLE. This machine allows us to scan and reproduce any rare book or document up to 35.5 Inches X 25.5 Inches. Which means we can even scan  "Elephant Folio's!"

Here is a beauty shot of our new machine!  Isn't she pretty?? But we have to come up with a name yet! :-) 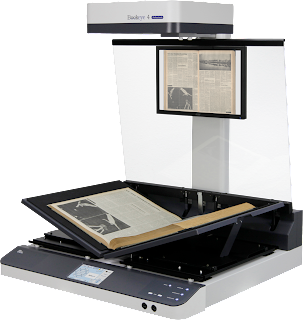 I received an email from a bookbinder friend of mine asking about the semi-retirement announcement I made on my personal Facebook page earlier this Spring. It's simple really. Anyone who has followed the projects and works of myself and Bookbinders Workshop knows that we've been tirelessly at work over the past many years. Now the opportunity has come to slow down a bit, and enjoy life a little more, finishing up the publishing of my awaiting manuscripts, over-seeing the letterpress edition of the Gutenberg Bible, lecturing on my career and Gutenberg, and so on. It's a very liberating feeling. I've been involved in the craft of bookbinding for 34 years, this year, and have considered myself extremely fortunate to have had the beginning foundations that I had. FINE education is required in order to become a Fine bookbinder. In this day it seems as though many younger binders are so thirsty to be "famous" that they don't spend the time necessary to learn the [deep and genuine] techniques of the true fine art of hand bookbinding. I'm not aware one program in America that truly equips aspiring binders to go out into the world and make money binding and restoring books precisely according to historic standards. There's a lot of reasons for this, but I [do not] believe that it's the student's fault entirely. I learned from a completely different set of 'rules' in the craft (and life) and I know for a fact that this is not taught in these programs today. 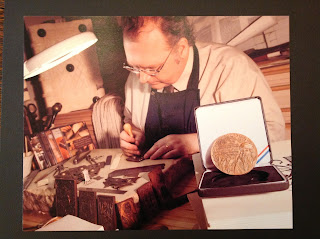 A number of people have asked me today if the BLOG title photo at the top of this blog-site is an original ~ or one of my works.... it [is] in fact a photo of one of my Gutenberg Bible 15thC period-style bindings in alum~tawed pigskin over solid beechwood boards, with my own aging & treatment recipe.

Someone asked me this morning about book sizes. They said they were interested in making some blank books, but wanted the sizes they make to be as historically correct as possible. So, for the sake of those who may stumble upon this blog that have no "book" experience whatsoever, I'll provide some additional basic info, as well.

Having standard book sizes is something that goes back centuries, and while these standards have varied slightly, from country to country, the European standard was adhered to by most, and this includes America up until the formation of the standard book sizes created by the American Library Association.

For the benefit of the casual observer or rank amateur, I'll include a little more background information...

Historically speaking, the "standard" book sizes (standard being a somewhat relative term, as mentioned above) were based entirely on the prevailing sheet size of the day. For example, until the end of the eighteenth century, and less so [in a production sense] after 1820, paper was handmade via wooden frame with screens, called moulds, and most all paper mills typically made their paper on all the same sizes of moulds, as this was largely dictated by the printers and customers demands of the day. When the printer received the paper for printing, the layout of the printing of course most often dictated the number of times the sheet of paper was folded, which created one "section" or "signature" as they are called. The number of pages in these signatures would be 4, 8, 12, 16, 24, 32, and, rarely, so on. Remember, however, that these are the number of pages, [not] the number of leaves of paper! Every leaf is printed on both sides, which creates two pages on one leaf.

The actual 'page size' will vary at the end of day, because every book is edge-trimmed slightly.

This table of sizes, along with others, some being speculative, are on the internet. But this older, more antiquated scale is best to use when wanting to make [blank] historic-facsimiles of books. I suggest the Crown-Octavo in a Cambridge Panel Style!

Many have asked me already for more information on the mentoring I received from Bernard Middleton in England. Well, that association began when he invited me (while I was still a Mennonite) to attend the New Horizons In Bookbinding conference in Oxford in 1994. A day after the conference, we met at his home in Clapham. We had a nice chat for a few hours, he gave me a tour of his bindery downstairs, and explained some of the projects he was working on, etc. I naturally asked him if he'd be willing to share many more details with me on what made his restorations so unique and sought after. He said he'd consider that. The following Spring, Middleton faxed my bindery and asked about coming for a visit. I was more than happy, as you can imagine, and we readied up the bindery to welcome him. I laid out many books for him to "judge".... a thick, massive 1819 German Folio Bible [that I re-backed], a lovely, rare European printing of the Amish-Mennonite song book, and many others. For two hours we discussed various points, but he said he was very pleased with the work. He continued mentoring me via fax and telephone, though for three or four years we traded visits between our homes, and he guided me through a number of crucial steps in [his] restoration techniques. Some of these are not always welcomed by conservators, as they can be rather "home-spun" in their approach.

On one of my visits Bernard had held back a folio set of Gould's Birds that he had re-backed so that I could see them. They were lovely dark green Levant goatskin bindings that he re-backed with matching leather and elaborate full-gilt spines. That week he asked me to go along with him to deliver them to Henry Sotheran's Bookshop in London ( http://www.sotherans.co.uk ). I watched as he 'penciled' his signature inside the back covers.

The private mentoring I received from Bernard Middleton was by no means all encompassing, but when reflecting on the many gifts he gave to me over those few years of knives, two sizes of tying-up boards, tools, papers, a period-style binding, etc., (in addition to the obvious guidance in historical authenticity) was obviously appreciated. On one visit, we re-backed a Cambridge-style 1720 Lucas' Sermons, a late 18thC Philadelphia printing of Barclay's Apology, a re-backing of a thin 19C. Offenbarung Johannes, a full-gilt back on L'Origine de la Gravure, and discussion and explanation of numerous other books.  On that same visit, I had taken along a 1777 Taylor & Skinners Maps of Ireland that I had rebound in historically authentic 'reverse calf' ~ which he liked so very well that he seemingly proudly handed the book to a very important guest/customer to the house that day and said "This is a lovely reverse-calf binding [Michael] made." That guest was no other than the 29th Earl of Crawford and Balcarres. Who immediately invited me to visit him, and Lady Crawford at Balcarres Castle in Scotland, on my next journey to the UK. And that, I did. And it was a splendid visit. I have photo's of the visit.

Like many things, friendships sometimes come and go. And while it would serve no good purpose to go into detail, the envious and jealous person that drove the wedge knows who they are, and that's all that really matters. And I can think of no better way to describe that person than with [un-related] words of Mr. Middleton himself in 1997, as he & I stood enjoying a chili-hot dog at the Amish community livestock auction.... "This is rather difficult to eat with any degree of dignity, isn't it?"


Shown here are two photos of books done by Middleton and myself. He did the full-gilt back in 27 minutes, not including the label. 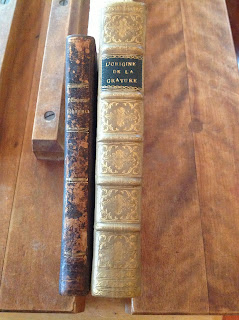 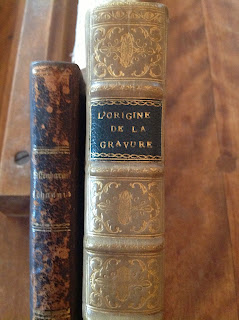 Michael Chrisman at his workbench, 2011.

I received an email from someone asking for a photo of me at my workbench. So here you go!.... 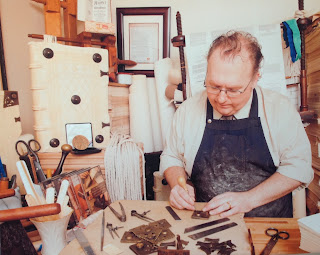 This is a photo of the top-right corner of one of my Gutenberg Bible bindings, taken in 2009.

Some photo's of my Gutenberg Bible binding work.

Some photo's of my Gutenberg Bible binding work....

The Manners and Customs of The Romans, 1740.

This book is in my personal library. I purchased it in deplorable condition (not even having a binding, but wrapped in wax paper) for $15.00 in 1989, from a bookseller. Today, it rests proudly, clad in one of my "Cambridge-Style" bindings I made for it in 1993. 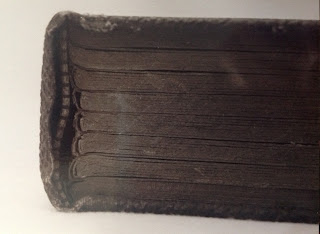 Another beautiful find in my stacks....

It was obviously badly re-backed by someone long ago. Researching the information on the inside, it appears to date from about 1485 A.D. It has both the front & back covers. Alas, what to do with such things, besides simply care for them in a box. I have considered making a lovely wall-hanging out it, though. 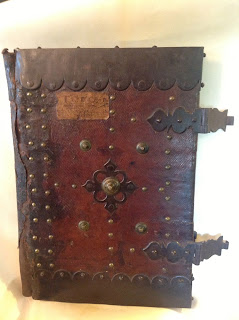 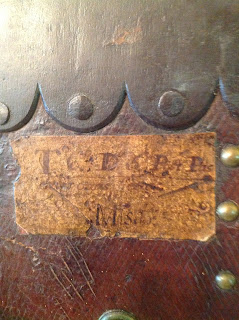 Some of My Favorite Pages